Christmas and New Years have come and gone and my friend Tom from Vancouver has arrived to join me before we fly to Havana for a month of Spanish Language classes at the University of Havana. Now an expert at renting cars and friendly enough with Louis at Avis in the Fiesta American to get a “free” second driver rate, Tom and I spread our wings and spent several days exploring the sights around Progreso. The Coast Road which runs east to west along the Gulf is a great highway that skirts the lagoon on one side and the beach on the other. In one day there are many things to see and do.

We started our Coast Highway tour heading east out of Progreso, with a stop just minutes outside of town at El Corchito. A palapa hut sits along the lagoon beside the highway to mark its access and for about 35 pesos you are ferried across the lagoon and into the mangroves where you are dropped off to swim in several cenotes. The water is fresh and warm and there are always raccoon, coati and bird life in the mangroves. On occasion if you are very lucky you will spot a crocodile.
For the keener, there is an explanation of cenotes below, straight from the Frommers guide book, Cancun and the Yucatan.


Portals to the Underworld

The Yucatan Peninsula is a flat slab of limestone that Millions of years ago absorbed the force of the giant meteor thought o have extinguished the dinosaurs. The impact sent shock waves through the brittle limestone, creating an immense network of fissures that drain rainwater away from the surface. The vast subterranean basin, which stretches for miles across the peninsula, is invisible but for the areas many cenotes – sinkholes or natural wells that exist nowhere else in nature. Many are perfectly round vertical shafts, others are in caverns that retain a partial roof, often perforated by tree roots. To the Maya, they were passageways to the underworld. Indeed they look sacred. Quiet, dark and cool, they are the opposite of the warm, bright world outside. 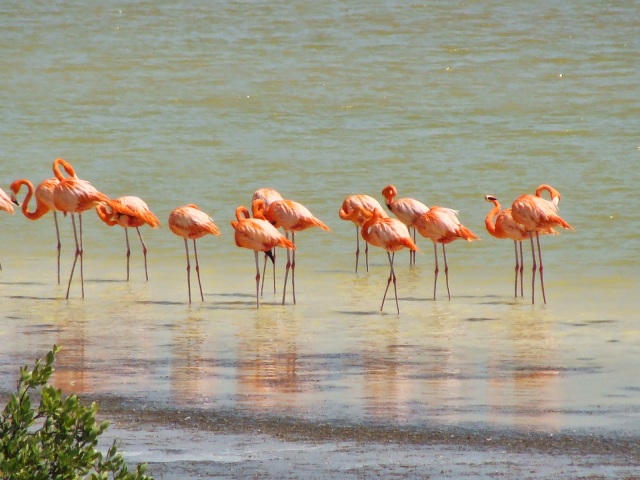 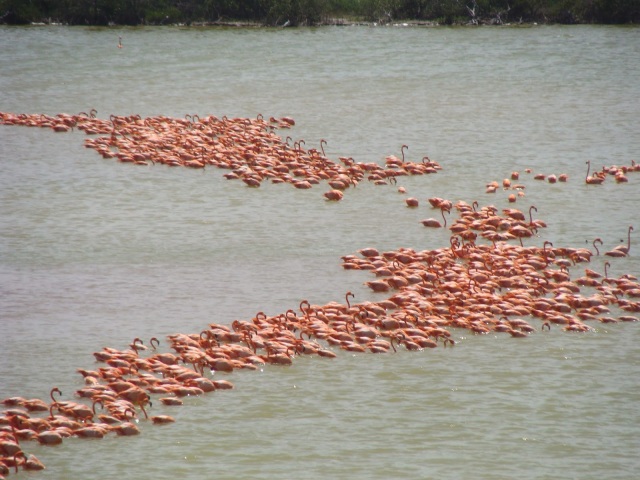 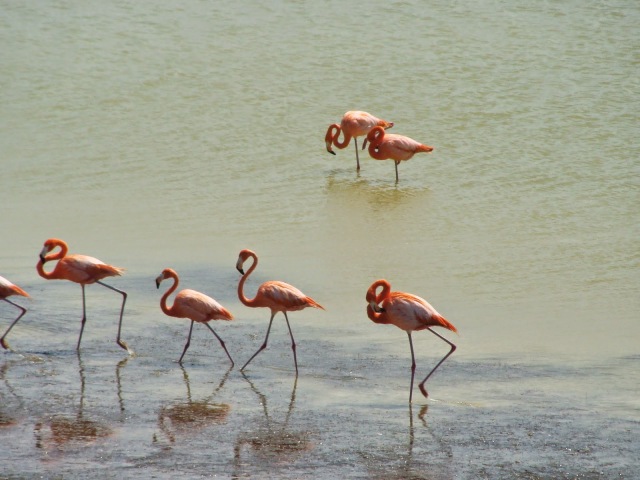 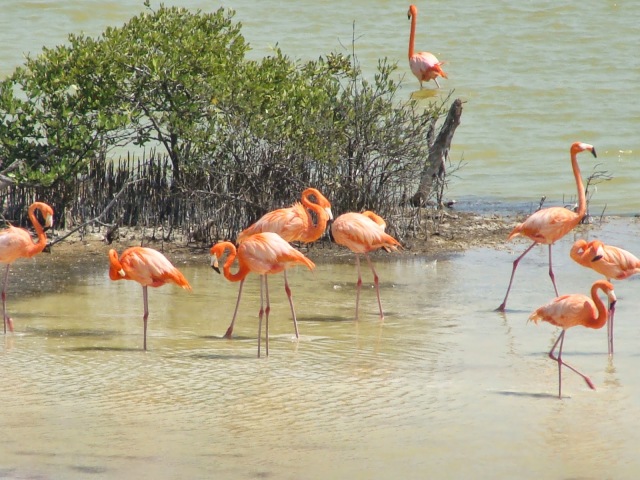 Carrying on east along the coast highway, you will come across an observation tower built for watching the flamingos. Parading endlessly bank and forth in stick like fashion, creating great cacophony with their honking; serving a purpose known only to them. If enough of them have their head and necks extended they look musical notes prancing on a treble clef. Apparently they are pink because of the amount of shrimp they consume and the older they are the pinker they get. Of course they are not the only bird to be spotted in the mangroves; there are also heron, ibis, etc. but the flamingos seem to draw the biggest crowd.

About 36 km down the highway is the turn off to Xcambo, a Maya ruin; and right at the turn is a natural salt deposit in the bottom of the lagoon. You can wade into the lagoon, bend down, dig into the sandy bottom and grab a fist full of pink salt. Xcambo which in Maya means “the place of the crabs or crocodiles” is a large ruin but has only been partially restored so seems much smaller than it really is. To complement the pyramids and to give a touch of irony, there is a Catholic chapel. Xcombo was occupied from 150 to 300 AD according to archaeologists and was important because it provided salt to the surrounding Maya cities. Not one of the more famous ruins it is a pleasure to visit because you can get up close to everything and do not have to fight the crowds or the hawkers.

Back in the car and back to the highway, we continued east to the small Port of Telchac just in time for lunch. A favorite outdoor restaurant, with somewhat fading Christmas decorations, serves ceviche de camarones and cold beer. After lunch its a good idea to beat the heat with a swim at the beautiful white sand beach just a few streets behind the restaurant which is often deserted except for the seabirds.

The highway back to Progreso has a turn in for Chicxulub, the small town east of Progreso. It is known for its large market on Thursdays, beautiful beaches, a colorful pier and being the site of the meteorite strike some 65 million years ago. In fact Chicxulub is Maya for “tail of the devil”.

In the other direction from Progreso along the Coast Highway are fishing villages of Chuburna and Chelum. On the way you will see the harbour with its many marinas and a large bridge over the Laguna Chelem. Rents are a little cheaper on this side of Progreso so there are lots of expats who buy or rent the pretty brightly coloured casas that line the beaches.