Skip to content
Arrived in Bogata to cold and drizzly skies, a bit of a shock from having been on the beach in Havana the day before. Bogata is yet another example of Spanish Colonialism. The wealth that passed through here on it’s way back to Spain was phenomenal. Bogata, established by the Spaniards in 1538, is a large sprawling city reaching far up and down a 2500m plateau between the Andes mountains where it is perched.
Not a particularly friendly city in many respects, Bogata takes a while to adjust to. After the gregarious energy of Havana it seemed dull and gray in comparison. But like all big cities, people have a public face and a private face, and while wearing their private face they can be warm, caring and helpful, as we came to experience. It is also a city where you need to dig a little deeper to find the gems and as it turns out it is full of treasures, lots of them housed in the museums, including the National Museum and the Gold Museum. The main square, Plaza Bolivar is the most historic location in the city where you find the Neo Classical Cathedra, (1538-1823) on the site of an older church where the first mass in the Americas was given in 1538. The modern government buildings look across the Plaza at the neoclassical Capitoal, home of the Columbian Congress. Just off the square is the Casa de Narino, the Presidente’s palace modeled after Versaille. Heavily guarded, the current President lives in the palace and like Buckingham there is even a changing of the guard. 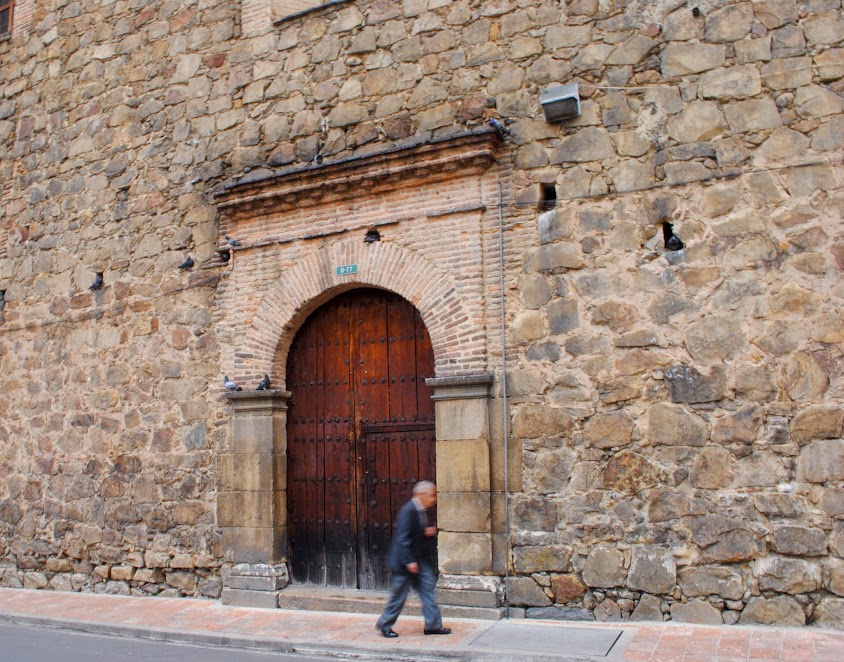 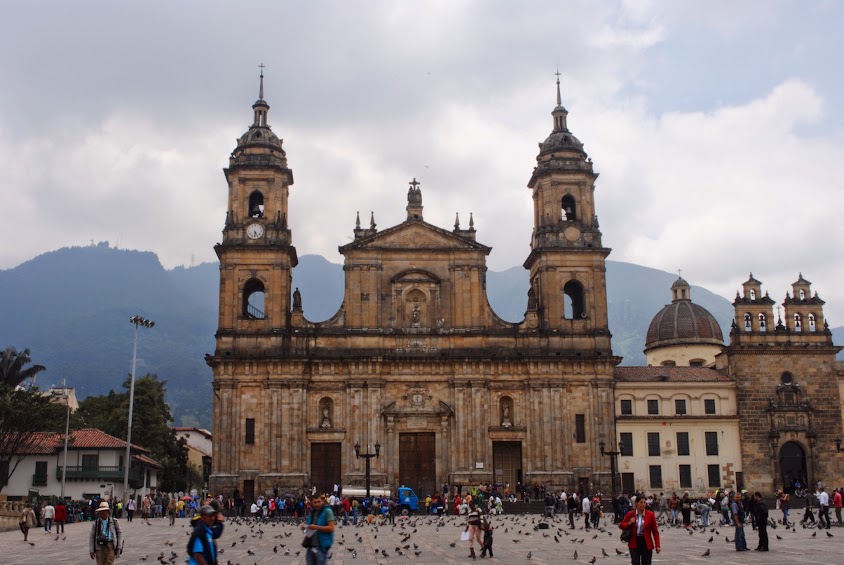 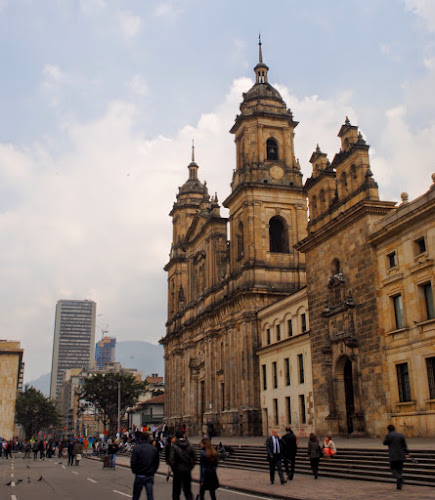 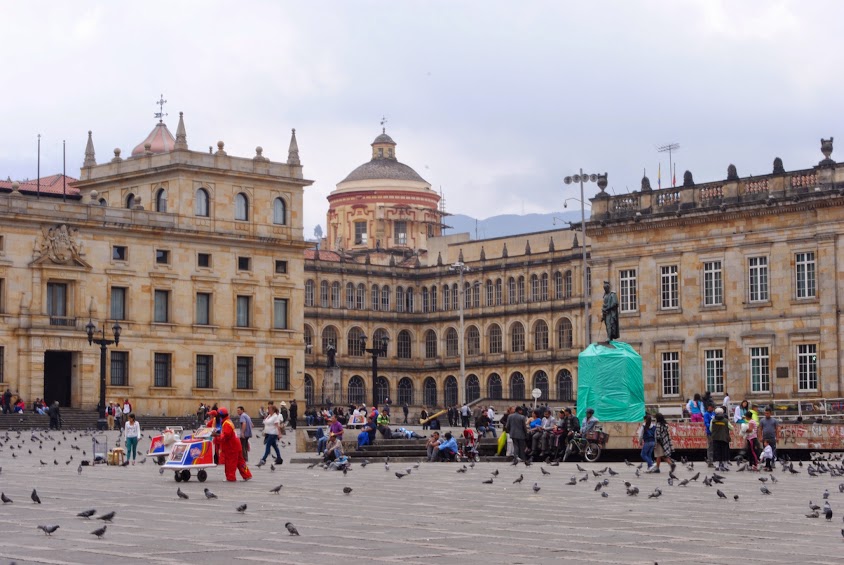 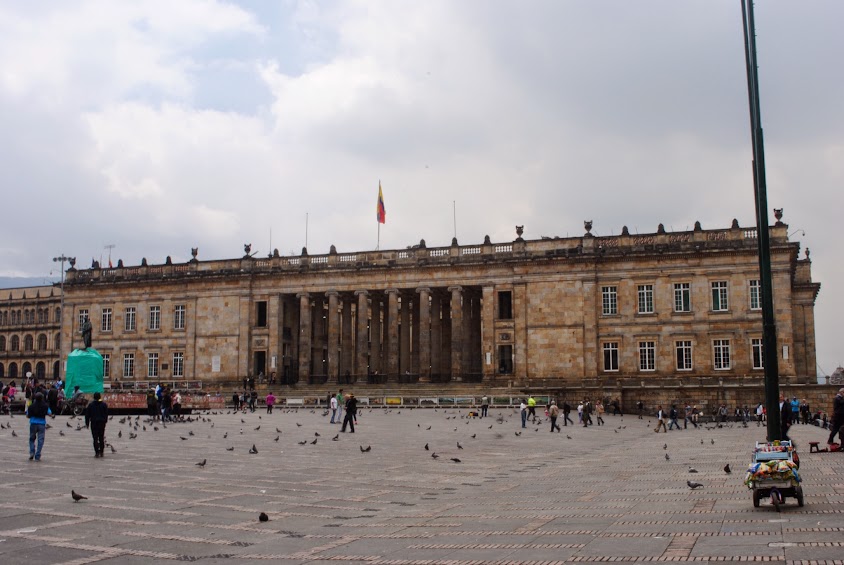 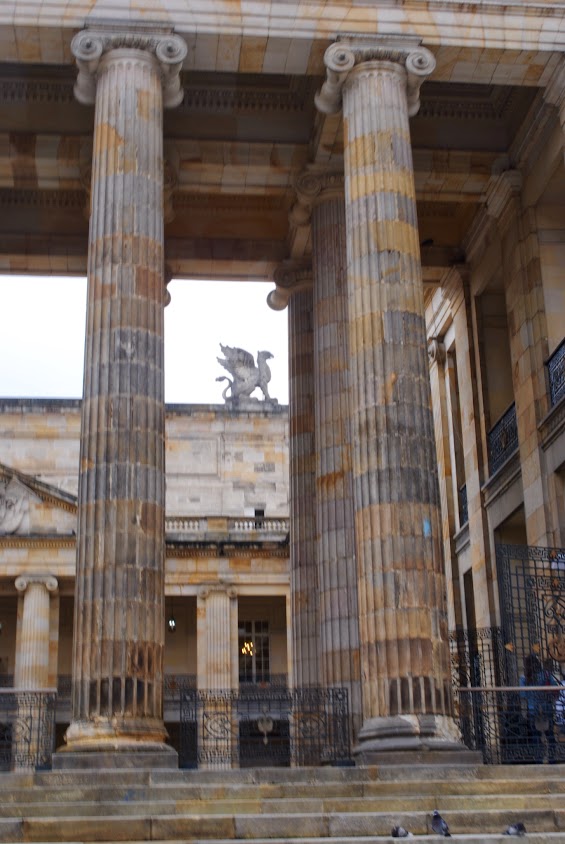 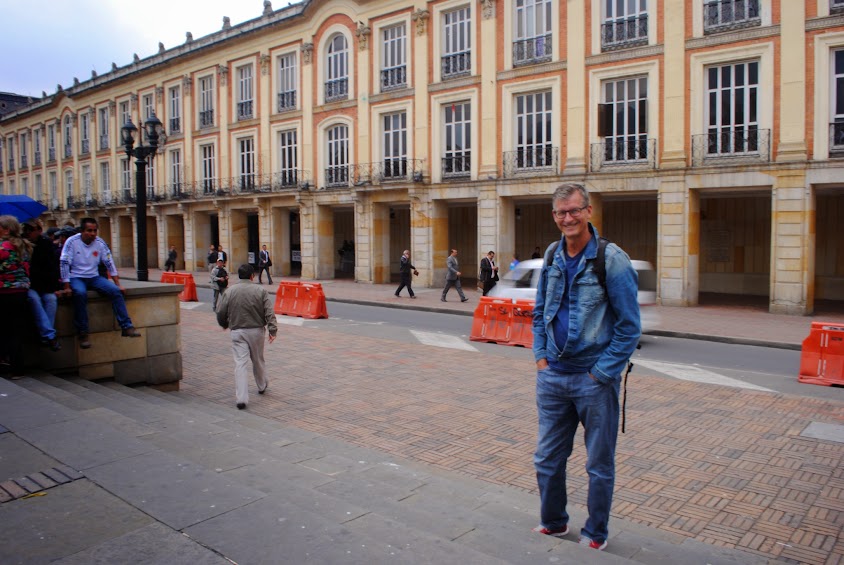 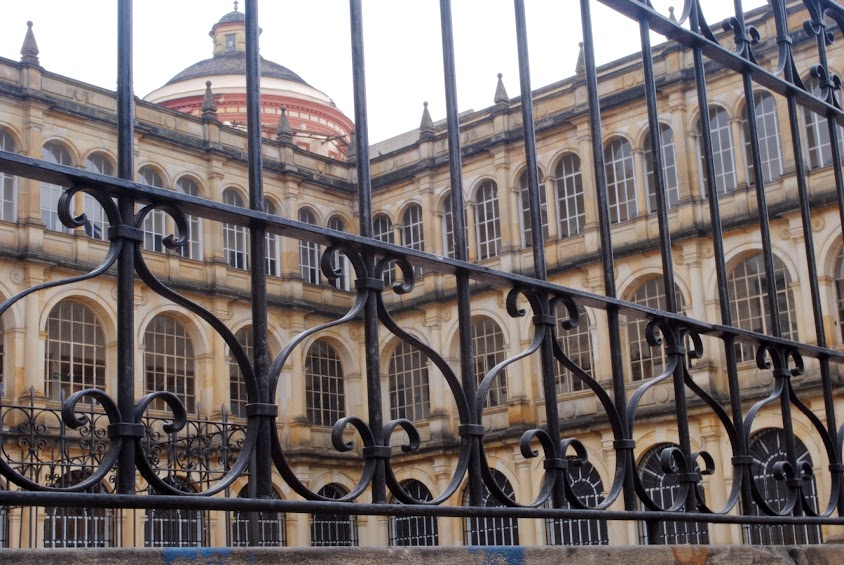 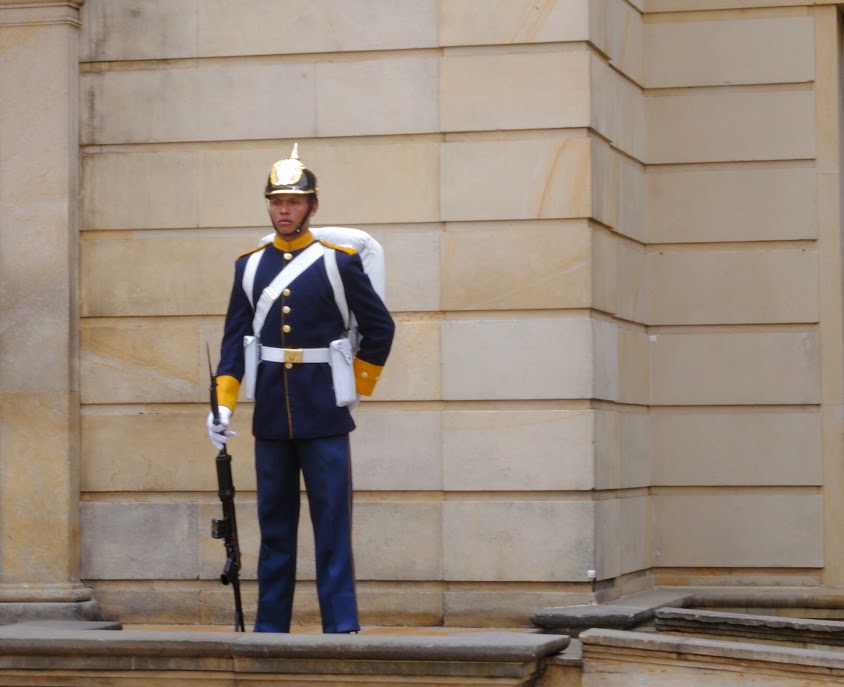 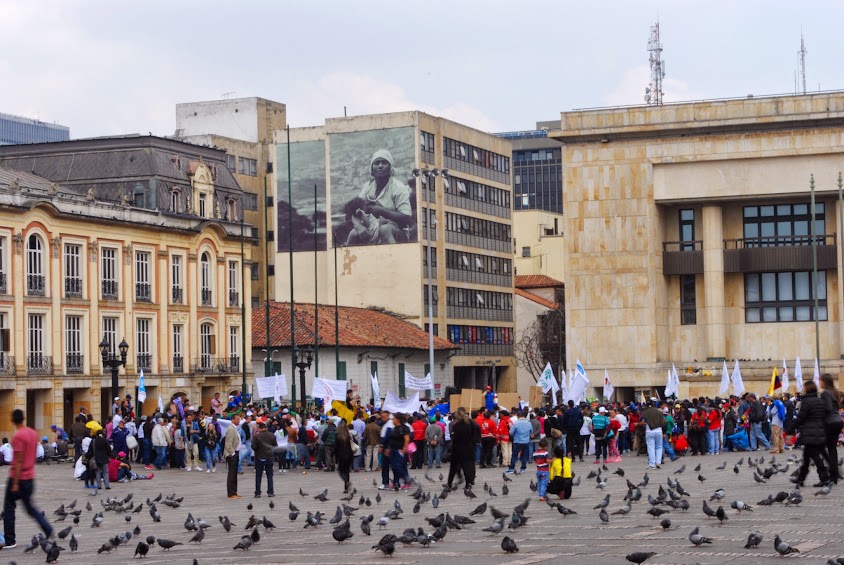 On our walk from our apartment to Plaza Bolivar we were overtaken by a “parade” of protestors, carrying signs and using anything available to make noise. Later we saw them in the Plaza where the protest terminated. Their signs told us they were protesting their government’s lack of advances around recycling. All this in the shadow of the great Libertador himself. The statue of Bolivar, damaged by pigeon poop but wrapped in protective coating while he is restored, sits mid square where people buy and disperse food for the flocks of pigeons that make the plaza home.
We stayed in a lively area in terms of cafes and coffee shops where we met some of the nicest and welcoming people. Our neighborhood, within walking distance of the Historic Centro, was mainly residential with lots of shopping close by. Our loft apartment, like most places in Colombia, has 24 hour guards for secutiry. A good thing in Bogota. The advice given to us several times over by locals was to take taxis at night and not to go out alone. 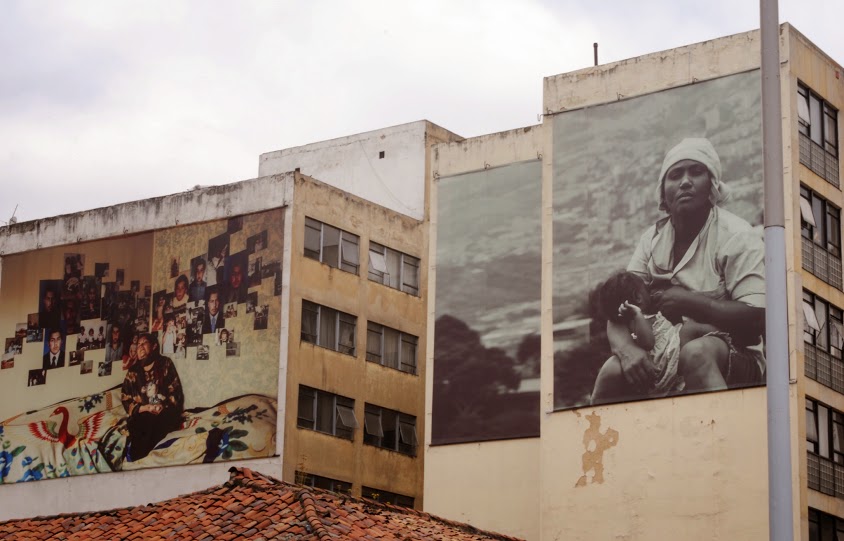 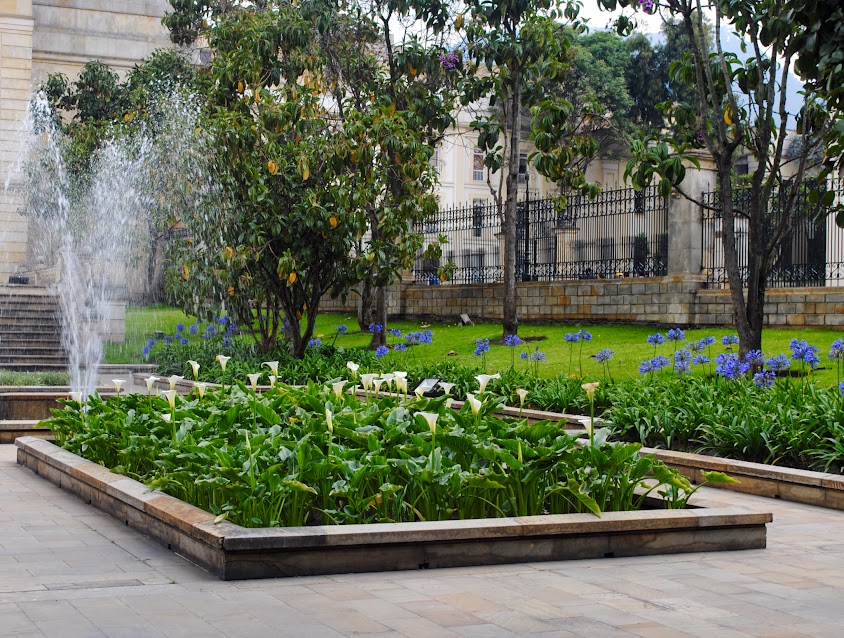 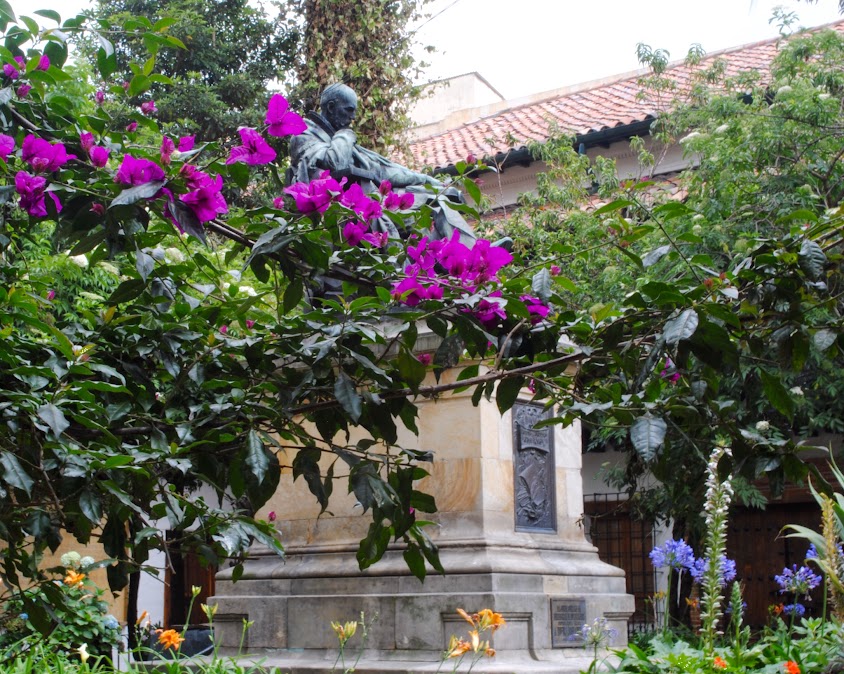 There are pretty parks and green spaces in the urban landscape of Bogata and in spite of the chilly rainy weather there were signs of spring. Although we weren’t in Bogata long enough to explore all that it has to offer, we got a good sense of the people, the place and the history. Visiting the National Museum was particularly interesting to learn about the Indigenous people, the conquering spainairds and the famous heros, artists and political futures that punctuate the sometimes violent and tumultuous history of Coloumbia. 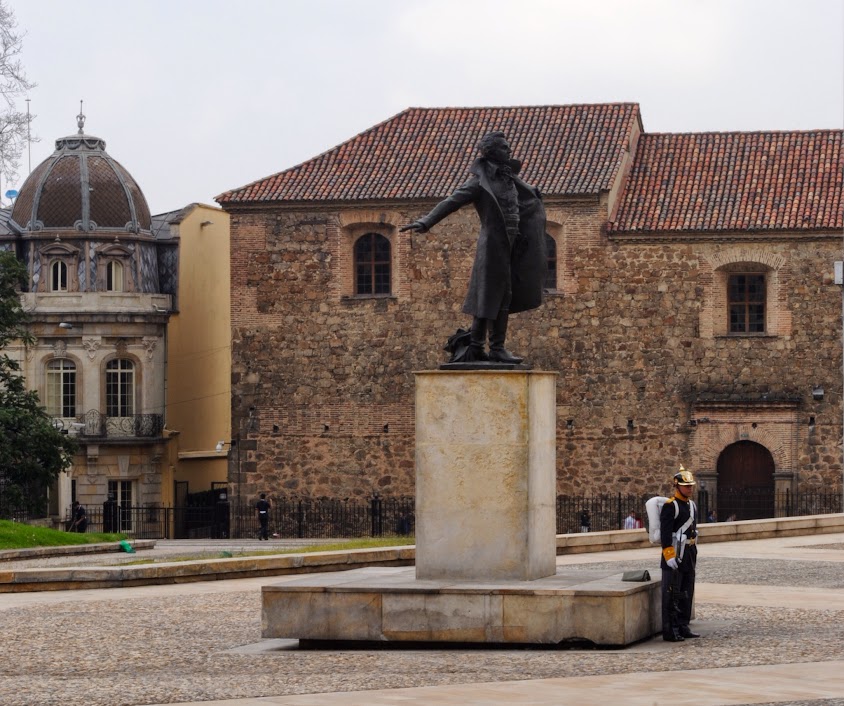 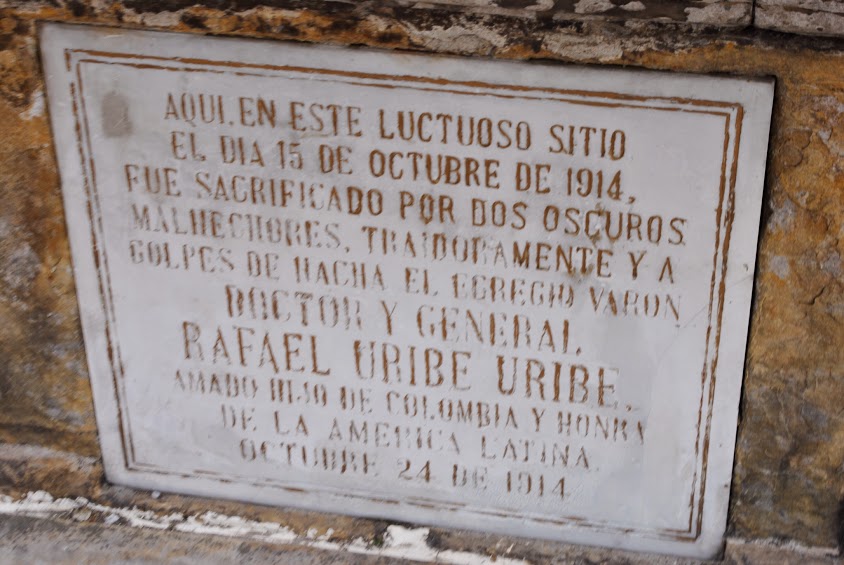 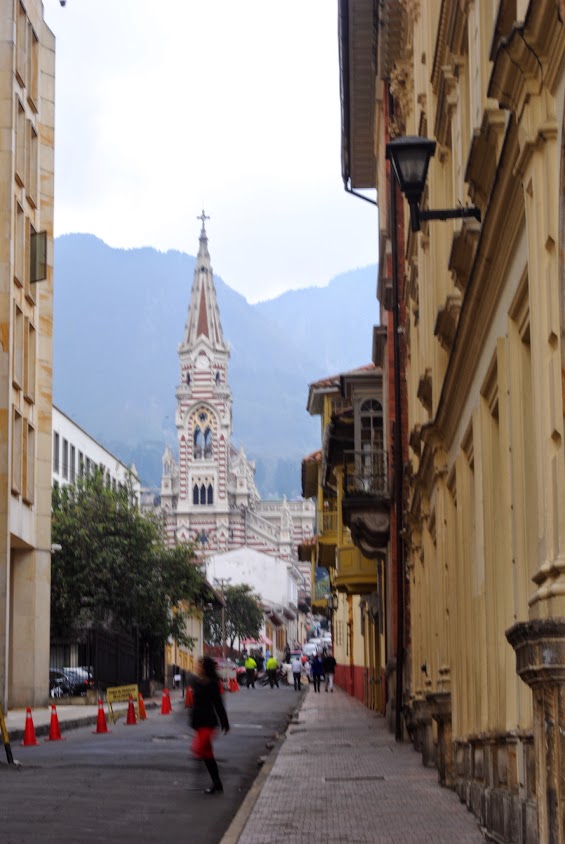 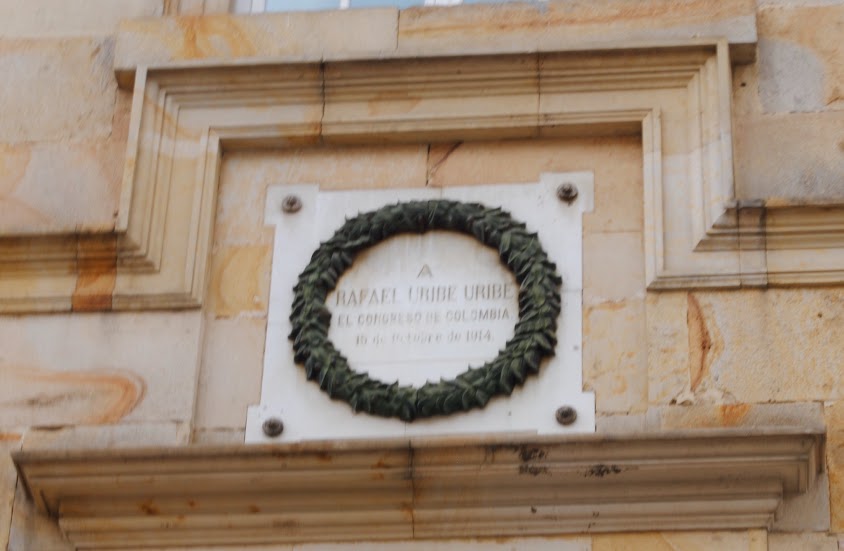 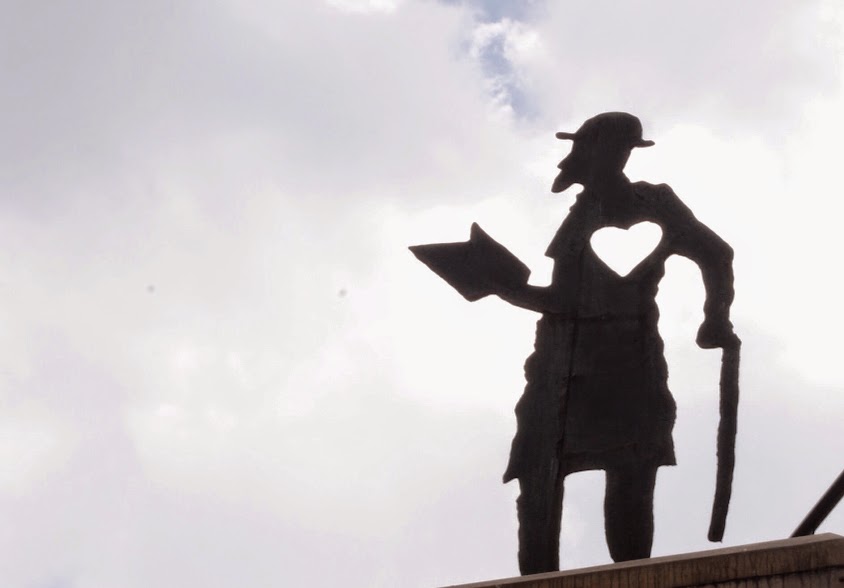 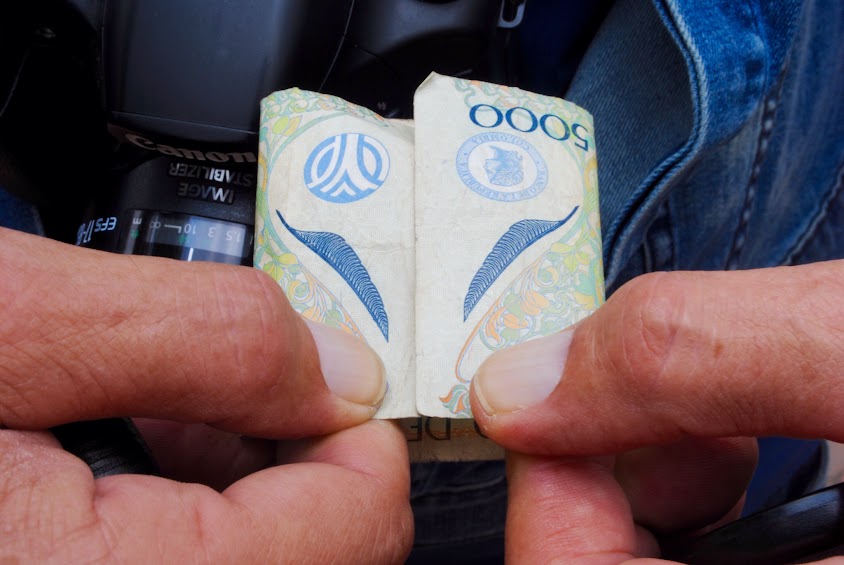 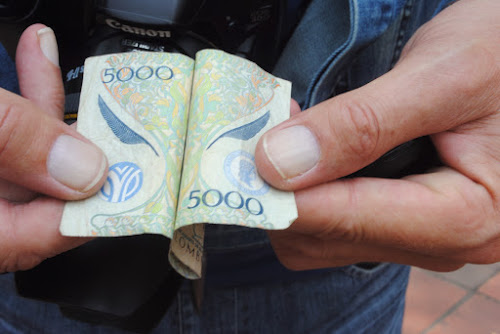 Tom learned that the Columbian 5000 peso can be folded to make a heart or a vase, a skill he will no doubt find useful in the future.