The shuttle van driver, Victor, invited me to sit up front when he picked me up at the hotel in Copan at six AM. I gladly took him up on it although I would have been comfortable enough in the rear seats since there were only the six other passengers, all of whom were headed to Antigua via Guatemala City

Stopping for breakfast, Victor asked if he could sit with me. What a nice man he turned out to be. We chatted away in spanish nearly all the rest of the way to Antigua, he very patiently spoke at a snails pace and nicely corrected my grammar. We shared some laughs and our stories and he proudly showed me his country. Along the way he pointed out fields of peanuts, cashews, melons (4 types), bananas, etc. The six hour trip flew by and soon we were in Antigua. I got a big goodbye hug and kiss from Victor and he gave me a beautiful piece of obsidian he had in the van with him. He has two, twenty something sons, one married but no grandchildren and his brother who lives in California trys to get him to move there, but Victor likes the country life in Guatemala. He drives the Copan/Antigua route every day and although his home is in Guatemala, close to Antigua, he overnights in Copan. He seemed to love his job and got plenty of toots and whistles from friends and acquaintances as we passed small towns and roadside stands along the way.

Overnighting in Antigua was pleasant enough although the place has changed since my 1990’s visit and it has lost some of its charm and beauty and seems a little grittier and not as cultural as it once was.

We had a nice dinner and returned to our least favorite of all hotels, “Don Quixote”. Whoever wrote the good reviews for this hotel was tilting at windmills! I was in room 9 x 5, the one with the navy blue sheets that hadn’t been washed and the bathroom that could only be accessed if the room door was closed. My room had an “outside” window..onto the dining room/kitchen of the hotel and throughout the night lights came on and off, toilets flushed and dishes clanged while I, out of necessity, tried to sleep with my window open, my only source of fresh air. I needed the air because I did not have a fan in my tiny box with a bed where I slept on top of the bedding to avoid the sheets. Such is life on the road and we were both glad to be up and away this morning at 5:00

The Last Ten to Chiapas

A new day and a new driver, we were the last to board the shuttle for the ten hour trip to San Cristobal Chiapas, Mexico and got the last and not the best two seats in the van. Imagine our relief when we were told that the majority of people would be leaving us at Lake Atitlan just an hour or so from Antigua.

Travelling north through Guatemala headed to Mexico is one breathtakingly long string of mountains, valleys, gorges and high altitude fincas wih their geometric emerald green terraced fields climbing high above the roads. Many settlements along the road are separated by deep gorges but connected by suspension bridges just wide enough for small vehicles, carts, animals and people. The further north we went the poorer the country seemed and of course Guatemala City, which we had a stop in, is no longer the city I saw in the 90’s. Back then, before the challenges of the new millennium, the centre of the city was accessible. Now to arrive at the centre you have to cut through miles of barrios, slums and ramshackle commerce to penetrate to the core. Urbanization, a world wide problem, has greatly impacted the capital cities in Central America where millions leave their country homes for the big cities seeking to improve their fortunes. Sadly, only a few manage to penetrate the economic, social and racial barriers and end up instead, just surviving in the slums like the ones that climb up and down the gulleys, hanging precariously off the sides of the hills in Guatemala City. 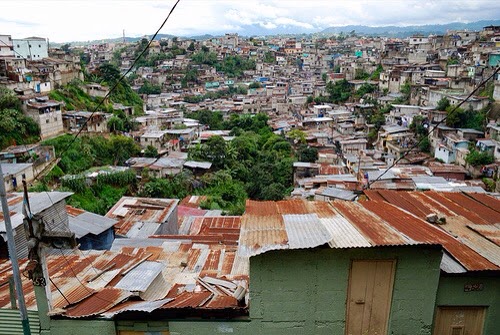 The countryside of Guatemala is spectacularly beautiful and we both agreed that given more time we could easily have spent a week or more wandering and seeing more of rural Guatemala. Anos proxima!

One thought on “Guatemala – Passing Through”