Puerto Escondido to Hualtulco and Back – “There Will Be Roosters”

Hotels and Homestays – Solo & Together

I arrived in Puerto Escondido late afternoon after a short flight from Mexico City. I had a week to spend in PE before meeting my friend Alena from Progreso in Hualtulco. I spent a very happy week at the Hotel Santa Fe right on Zicatela Beach. A little pricey but well worth the expense for the beautiful gardens, two swimming pools, ocean views and gourmet restaurant. Between beach walks, sun bathing, and pool dips I had a pretty relaxing time watching the world go by.
﻿﻿﻿﻿﻿﻿﻿﻿﻿﻿﻿﻿﻿﻿﻿﻿
﻿ 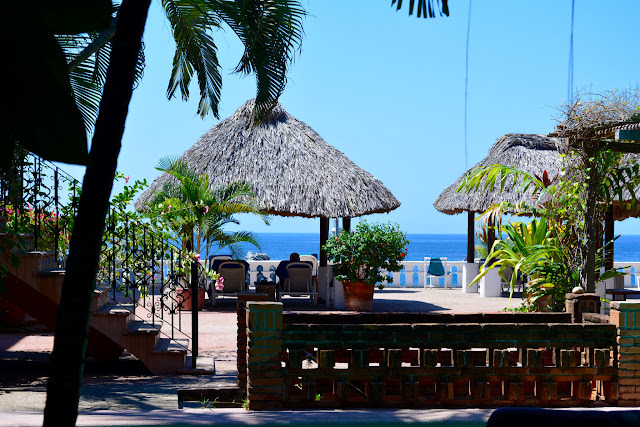 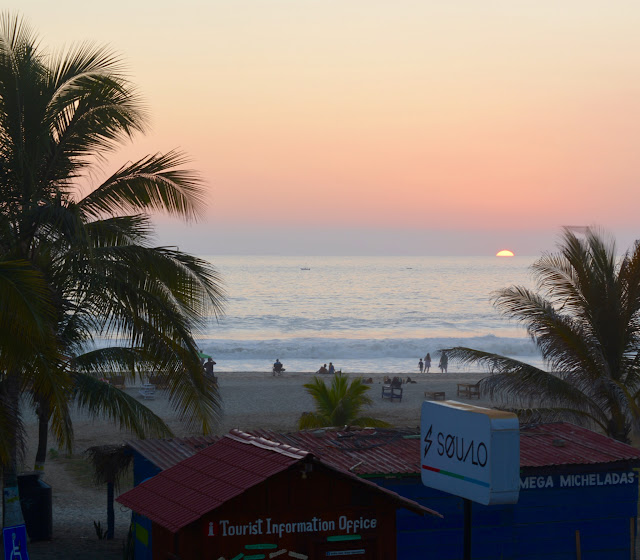 Sunsets are particularly stunning in PE and can be enjoyed from many vantage points including a nice restaurant with a margarita on the rocks. A friend from Vancouver happened to be in PE so we met up a few times for drinks and dinner just in time for the suns final dip below the horizon.

From my hotel on Zicatela beach I could walk in either direction into PE Centro or further down the beach to smaller communities on the outskirts of town. The sand is hot and deep and sloped and can make for a challenging walk as I found out when I twisted my foot and ended up with a minor sprain that took a few weeks to heal.

Walking the beaches reminds me of being a kid, when you would poke along, stopping to examine whatever catches your eye. Time seems to evaporate and your senses take over, the sights, the sounds and the touch of sun and sand make for a very “in the now” experience.

After a long walk there is nothing like a fresh coconut water especially if you get to chose the size you want. Locals of course love the beach too and you get to watch families play together in the waves, enjoy long lunches of local seafood and nap under palms or umbrellas as time stands still for them and their always present families.

Home Stay – Together With Alena

One of the highlights of my time on the Oaxaca Coast was meeting up with my friend Alena from Progreso and our stay at the home of my friend’s parents. I met my friend Rangel a year ago in Campeche and we have stayed in touch. He is originally from the town of Santa Maria Tonemeca on the Oaxacan Coast and his parents and brother still live there, his parents in a family compound which also houses his grandparents and various aunts, uncles and cousins and his brother and wife in a house in the heart of Santa Maria Tonemeca.

After picking up a rental car and Alena at the Hualtulco airport we drove back up the coast a few kilometers to Tonemeca where we were flagged down by Rangel’s mother, Esperanza, who had come out onto the road to make sure we found our way to their home. I would have recognized her as Rangel’s mother any day as there is a remarkable resemblance between mother and son. Rangel’s father was waiting at the house and we were met by Rangel’s parents with warmth and hospitality. We stayed with Rangel’s family for four nights and had a couple of visits with Rangel’s brother and his family.
Being so close to the beaches of Oaxaca and having people who could guide us to the best places to see, eat and swim was great. Our first day was spent at the beach in Mazunte. The surf was high and we were restricted to swimming close to the top end of the beach because of the undertow but we enjoyed a rented chaise long under a palapa before returning home to casa Valencia Cruz.
In the evenings we would visit with Esperanza and her husband Nato, and twice we went out to eat local food with Rangel’s mother.
The rest of our days were spent trying out the remaining chaise longs on various beaches in the area. Our favorite was not Mazunte nor Zipolite as expected, both of which we had heard so much about, but rather San Augustinillo where the swimming was easiest. At the end of one of our days we drove out to Ventanilla, the home of a turtle sanctuary run by a local cooperative, where we were rewarded with a spectacular sunset and multi-coloured sand that ran from black to brown and many hues in between.

After our home visit with Rangel’s family we said our fond farewells and headed to Hualtulco where we spent two nights. Hualtulco is one of those ready made places for big, exclusive and all-inclusive hotels. The town that stood in the path of the development of resorts and hotels was relocated a few miles away from the area, so that the hotels could access the best of the beaches for their guests.  We stayed in the Hotel Zona in a smaller and cheaper hotel and enjoyed a fun dinner out where we garnered an invitation for dinner in the “real town of Hualtulco” the following evening.
Our new friend Erik met us in front to the appointed restaurant, his favorite pizza place, a hang out for the towns trendy set. Erik was very entertaining and shared a lot about his life in Hualtulco and the history of his family. He hasn’t had it easy but was passionate about his life and especially his family and surfing.
After our brief stay in Hualtulco it was time to return the car to the airport, where we hopped on a bus and headed back to Puerto Escondido and Semana Santa.

The bus from Hualtulco to Puerto Escondido is a short beautiful ride along the coast and in no time we were ensconced in our new digs. We had planned a week in the Bungalow we rented but because of my foot injury we spent two weeks so I could rest it and exercise it properly and bring it back to walk-ability.
Not a bad decision at all as the high walled bungalow and its surrounding gardens that hid a secluded pool were just what the doctor ordered. We were able to shop and prepare our own meals and as we were the only people staying in the bungalows we had free run of the place, taking advantage for late night star gazing swims.

Of course we didn’t spent all of our time swinging in the hammock or lazing around the pool. We wandered up to el Centro a few times to the market and enjoyed more local cuisine, spent a few days on the two beaches just north of Puerto Escondido (Manzanillo and Puerto Angelito).

A spectacular outing was taking the bus north to Rio Grande where we crossed the highway to catch a taxi to Zicatela.
Once in Zicatela we hired a boat to take us around the Laguna de Chacahua. The Laguna is a bird and wildlife sanctuary and we saw egrets, eagles, herons, storks and many other species. We stopped for lunch in the small community of Chacahua where we walked over to see a crocodile rehab centre where they also had turtles and iguanas etc. It was a long day before we got back to Puerto Escondido but the wildlife, birds, scenery and boat ride more than made up for the long haul.

A month on the Oaxaca Coast flew by and was marked by long sunny days of beaching, swimming, visiting with friends, tasting local cuisine, the crowing of roosters, turning sixty four and savouring the life of a Mexican Coast. But as they say all good things must end, and so, we boarded a passenger van bound for Oaxaca City, six long hours from the lovely Oaxacan coast.

One thought on “Oaxaca Coast”