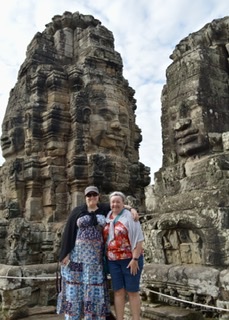 Gentle, kind and beautiful my travels in Cambodia have been made easy and enjoyable by the people. I’m traveling with my friend Heather for a few weeks before she returns to work in England. She kindly met me at the international airport in Bangkok after a long flight from London. We transferred to the smaller airport and flew off to Siem Reap where we stayed at a lovely little guesthouse off the noisy tourist streets. Chheng Residence Hotel was lovely with a garden pool area and very helpful staff. Always good to have somewhere to cool down the body temp after a long hot day of exploring.

After dinner and a swim, we wandered out into the evening and strolled down the avenues to the river and into Psar Chas, the old French colonial heart of Siem Reap. There are markets, restaurants and bars tucked away in the old French-era shophouses and the Main Street of the area is known as Pub street. There were tons of tourists and it was crowded but still somehow manages to keep a small town feeling. Lots of travellers, vacationers mingling with the Khmer people as the Cambodians and their language are called.

Other than the pretty zip of this little town people come to Siem Reap to visit the Angkor Temples, impressive monuments to the greatest ancient civilization in SE Asia. These 12th century temples were originally built as places of Hindu worship and later over the eons converted to Buddhist Temples. There are more than one hundred monuments spread over 3000 acres that mark where the Angkor era was born and marked by huge building projects. We managed to visit Angkor Wat, Angkor Thom and Phnom Bakheng for the sunset. After repeated attacks from Siam in the 15th century the city was abandoned and lost to the jungle. An extraordinary set of ruins one can see where the early people of Cambodia lived and worshipped and displayed their wealth and culture.

We had a nice mix of town/country while in the Siem Reap area by shifting from the Chheung Residence to the Bong Thom Forest Lodge about twenty minutes by Tuk Tuk outside of Siem Reap. A beautiful resort hotel it had proximity to some of the lesser visited temples and was a nice respite from the hustle and bustle of the city. The food was great and we were given a “certified” cooking lesson on how to make mango salad and the national dish of fish amok, a coconut cream base mildly spiced dish served with rice.

There are buses and vans etc that will get you from Siem Reap. To Phnom Penh the capital, but since hiring a private car was a $100USD option we decided on that and it would allow us to make a couple of stops along the way. Our driver was great and our first request was to stop and see the floating villages on Tonle Sap Lake. Interestingly, the people who live in the floating villages are mostly stateless ethnic Vietnamese fishermen and their families. The homes are pretty basic and the lake is not somewhere you would want to swim but it is pretty nonetheless and bordered by green rice fields. We stuck to the land roads but you are able to catch one of many boat tours that take you up and down the lake and to a variety of villages, some genuinely floating and other on poles. We also tried to visit some Monks who live along highway 6 near Kompong but our driver was unable to locate the school where a Canadian friend had volunteered. It was a long day in the car, broken up by a couple of stops and a great lunch we finally entered Phnom Penh as dark was settling in.

One thought on “Cambodia Part One: Siem Reap”