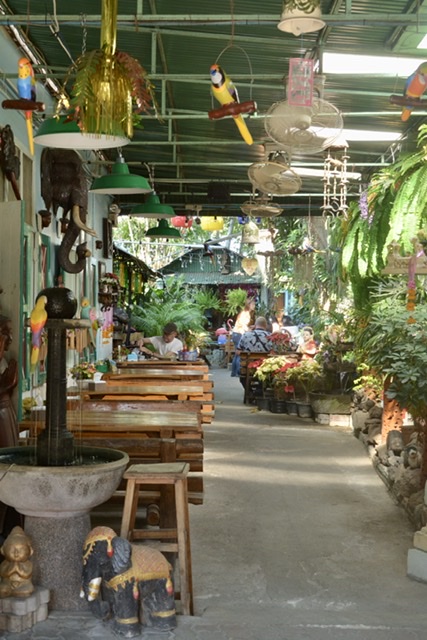 Joined Dawn and Craig, my travelling buddies at a air BnB condo in Chaingmai. The condo was the size of a postage stamp by Canadian standards we nonetheless had our own bedrooms and bathrooms. Nice building, with all the mod cons like a washing machine and with a roof top pool and lovely views of the city.

Chaing Mai is very big, our taxi driver told us it could take 5 hours to travel from the north end to the south end of the city. But the heart of Chaing Mai is the old walled city. A very large area, one can see ruins of the old wall and the moat is still there and makes for great strolling and people watching. You can enter the old city through some of the ancient gates, there are other entrances but not as romantic sounding.

Inside the labyrinth that is the old city you will be accosted by the sights and sounds that are born out of the proximity of homes, hotels, inns, restaurants, bars, outdoor markets, tuktuks, motos, cars, temples, Wats etc., all zipped up together by narrow lanes and wider arteries that are not necessarily the fastest routes. A great walking space it doesn’t really matter if you are lost or which direction you head you can always google map your way out, but in the meantime you will be rewarded with something interesting at every turn.

Inside the walls we shopped, dined, wandered, people watched, visited temples and watts and rested our tired feet while sipping fresh fruit smoothies. Friends from Canada have Thai friends that own a restaurant called the Blue Diamond. A wonderful place and Nee gets up at 4:00 am to bake for the deli section of the bakery. It looks, smells and tastes wonderful. I had met Nee and Eed, her husband, in Nanaimo last summer and they were so gracious and warm when I visited the Blue Diamond. If I was staying in Chiang Mai this would definitely become a regular place for me.

One day we hired a driver, Bon Bon, to take us to a few spots we wanted to visit outside of Chiang Mai. The first was the Kanjana Elephant Sanctuary (www.kajanaelephantsancuary.com) if you need to look it up. We chose this sanctuary because it is not a “riding” camp, which is now frowned upon and with good reason. The elephants at Kanjana are very used to people. There weren’t many, I think six, all female and all former “work” elephants with the exception of a two year old who was born in the sanctuary. After “suiting” us up in protective shirts and pants we were taken to prepare squash to feed the elephants, a little bribe to make them like us. Feeding them was quite an experience, for one thing you had to watch your toes, then you had to give them commands that indicated that they could take the food with their trunks or that you were going to insert the food right into their mouths so they would have to raise their trunks. The inside of an elephants mouth is an experience in itself. It is soft and made up of many lumpy large folds of tongue like flesh. They are sticky and damp and your hand comes out the same way.

They were so hungry and as the guide at the sanctuary said they like to poop, eat and bathe and it sounds like several of them deserve to do exactly that after hard lives in logging and farming. They have been replaced by machinery of course and were too much trouble and expense to keep as pets; that is why there are elephant camps all over Thailand, many with the best of intentions. None of the elephants will leave the sanctuary, they will spend the rest of their days there and one in particular with a broken leg was very sad and it was good to know she had a safe haven.

After feeding we walked with the elephants down to the river and gave them a good scrubbing with wire brushes. They loved it and rolled around in the water, between the people and the elephants spraying each other with water we were pretty wet by the end of bath time and we all walked back to the main camp. For $60 CAD it was well worth the experience and I like to think the elephants benefit.

After the elephant sanctuary we motored on to the “Sticky Falls” in Chet Si Fountain National Park. A beautiful forested park, with camp sites, hiking trails, picnic areas and of course the sticky falls, so named because you can actually walk up and down the falls without slipping (too much). The water was refreshing and not too cold and the falls were so steep in sections we had to use ropes to climb up or down.

Feeling clean and refreshed we headed to Baan Tong Luang, an eco-agricultural hill tribes village. Many of the people who live here are refugees from Myanmar. To quote the brochure “ Baan Tong Luang hill tribes community has been founded since 2003. To preserve the traditional way of life of the tribes and help families and tribes who work for the Maesa Elephant Camp. To remain in its original life, which cannot be found in the present day.”

There are eight ethnic tribes living together in this community. They live in traditional style building, each according to their cultural practice and the arts and crafts that are mainly handmade are sold in their section of the village. Each tribe has very different characteristics in their work but all of it is colourful and beautiful from baskets to tapestries. One group is the long necked people called the Karens. Only the women wear the neck bracelets that weigh enough to force their rib cages down, giving their necks an elongated appearance.

For me the idea of an “indigenous” center made for tourists to come and see the culture and history of these different groups could be problematic but my sense here was that the people were safe and supported, living a peaceful existence quite different from the lives they had to flee in times of war and turmoil. Interestingly these tribes originated in many different places; Tibet, Myanmar, China with many migrating to Thailand in the 1980’s.

Bon Bon our driver spoke pretty good English and he answered our millions of questions about Thai society, daily life, military service, being a monk, the cost of living, etc etc. He was probably happy when the last stop of the day came and he let us lose at the Phra Borommathai Doi Suthep Temple on the top of a mountain above Chiang Mai. With a gondola to take us to the top, thank God, as we had walked and climbed a lot since morning, we were impressed enough with the Temple itself but there were also outstanding views of Chiang Mai in The Valley below.

The markets in Chiang Mai deserve a mention of their own. On Sunday evening there is a street market that goes on for blocks and blocks, selling handicrafts, art, clothing, food and household goods to mention a few things. There is also the Chiang Mai night market a permanent set-up with terrific street food and again blocks and blocks of stalls selling everything imaginable. The markets themselves are a work of colourful vibrant art. The atmosphere is upbeat and people go the markets to shop, dine and enjoy live music and people watching.

Our last night we took a dinner cruise on the Ping Mae River which was somewhat of a disappointment. We were picked up at the condo and drove around until the van was full of cruisers. At the river we were shepherded down to the boat and given dinner which was mediocre and then set off on the cruise. Since it was night time it was dark and the only time you could really see anything was when we passed a brightly lit restaurant or bar. There were some very nice homes along the river and some upscale restaurants. Not sorry I did it but wouldn’t do it again.

So arrangements have been made, Dawn and Craig leave for Krabi and Koh Lanta in the south of Thailand in the morning and I take a van north through Chiangrai to Chiangkhong where I will overnight before crossing over the Friendship bridge into Lao.