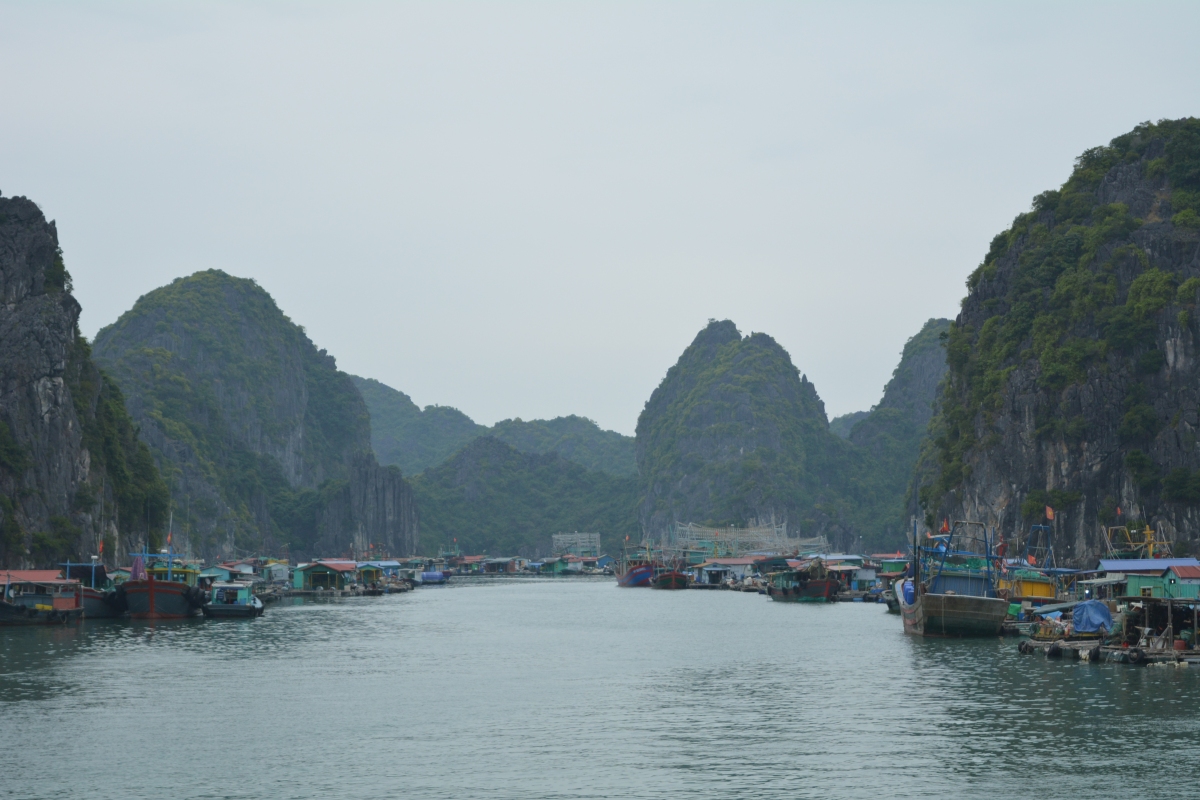 Straight up out of the sea rise the limestone outcrops that rule the waterways of Halong Bay. A beautiful sight in any weather, it was really cold and cloudy while we were there. Regardless Cat Ba Island is the place to go for a few days if you are short of time and for many more days if you have the luxury of languishing. We packed it all in in the three days that we had.

Arriving late in the day on a speed boat from Hai Phong, we had an evening to wander and familiarize ourselves with the town of Cat Ba, an old fishing village. We stayed in a lovely and very inexpensive hotel, Cat Ba Island Hotel. Just off the beach front road, it was quiet, clean and the family who ran it were friendly and helpful.

The place is packed with hotels, restaurants, bars and markets that sell plenty of “North Face” goods including puff jackets, a popular choice for those not prepared for the chilly weather. Clearly we were here during the “off season” and given the number of hotels and tourist boats it has the potential to be very crowded during the high season.

We left early for a day long boat tour of Halong Bay, boarding a lovely newly built boat, we spent the whole day cruising, making lazy circles and arcs between some of the nearly 2000 limestone outcrops that jut out of the sea in the Bay. This trip in the emerald water of Halong Bay was a Vietnam highlight for me. It’s the place you often see in the travel brochures and is as beautiful as pictured.

The narrow passages between the rocks are home to the Vietnamese people who chose to live and work on the water. There are boats, flota homes, markets, businesses and lots of fish farms that make up these floating communities. There are even families who offer “home stays” that allow you to be in the heart of the action.

The tour included landing on Cat Ba Island to visit a remote village, very touristy but it was informative of the life style of these island people. We visited a home where they made liquors infused with cobra, hibiscus and other exotics, tasting was included but I passed on the snake liquor. It was nice to get off the boat and stretch our legs and walk through the village, ending with the change to dip our feet into a pool of the tiny fish who nibble at the dead skin on your feet.

After lunch on board, we stopped and lowered ourselves into kayaks from the boat deck, paddling through bays and under sea arches and through caves, seeing the limestone up close.

Normally we would have headed for a swim afterward, but the weather wasn’t cooperating and so we went instead to “Monkey Island’, where yes we saw monkeys and climbed part way up to the top of a bluff. Even at half way the view was great.

The next day we rented scooters and followed the road running north from Cat Ba City until we reached the end of the road at one of the several ferry docks that connect the Island to the main land. As we climbed the mountains behind Cat Ba City we had stunning views out to the sea. We passed through agricultural land and small villages.

On the way back we stopped and had some of the best Pho Ba (beef noodle soup) at a family restaurant. After lunch we headed to the Trung Trang caves and had a steep climb up cement stairs with a warning to those with high blood presseure, cardiac issues or agoraphobia to forget the climb and wait below for their friends.

Up and up we went and were rewarded with a cave crowded with stalagmites and stalactites formed over the ages, one drop of mineral soaked water at a time. The long tear drop formations sparkled with crystals. It was cool at first in the cave but the closer we came to the middle of the cave it warmed. It was dark and dank but the path through the cave was well lit and cemented for the ups and downs of the of the cave floor.

After the cave we hurried back to Cat Ba City to catch our 3:50 shuttle that would get us back to the mainland and the Hai Phong airport in time to make our flight to Da Nang. When we arrived the young lady who had sold us our transfer tickets the day before, was clearly distraught. Turns out we had misread the time as 3:5o when in fact the appointed time was 13:50. Not the same at all. We waited while she made some phone calls and with the proficiency we have come to recognize as a Viet Nam trait, we were whisked off on a bus to a ferry dock where we were handed off to a “speed boat” which got us to the mainland in record time. Wearing colour coded lanyards, we were led to a bus and delivered to a gas station where a waiting taxi sped us to the airport in time to check in and make the flight. It felt like we had become parcels and all we had to do was sit back relax and trust the process and it worked.

A short flight later we landed in Da Nang and luggage in hand we hailed a taxi to take us to the ancient city of Hoi An.